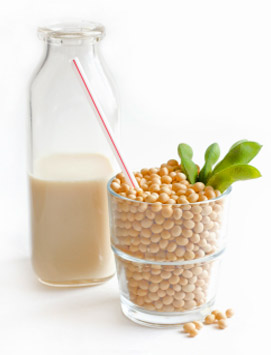 As many of you already know, I bought a soy milk maker a couple of weeks ago in an attempt to eat healthier without breaking the bank.  Well, I’m happy to report that it was a HUGE success!  Since receiving my Easy-Clean Automatic Hot Soy Milk Maker, not only have I made soy and rice milk; I have discovered that I can also make almond milk with this amazing machine!  I was a little skeptical because my family is very particular about brands with soy milk.  We only drink Silk because we have found the other brands did not have the smooth texture that it did.  I am happy to report that the milk made from our soy milk maker was JUST as smooth, white, and tasty as the Silk milk we were used to!

As for the cost of making your own soy milk.  When I purchased the machine, the advertisement stated that you could make soy milk for as low as 25¢/gallon.  You probably could make it that cheap if you have a soybean farmer near your home who would sell you the dried beans really cheap, but for the average person; I think it will be more along the lines of 50¢/gallon which is still REALLY CHEAP! Now, I opted to purchase Bob’s Red Mill Organic Soy Beans because they taste better and have no GMO (for those of you who aren’t familiar, GMO=BAD, or so I’ve been told).  With the organic, no GMO soybeans I bought from amazon.com; my soymilk will cost me about $1/gallon to make.  This is still a HUGE savings for my family!  In south Louisiana, our milk prices stay around $4/gallon and all 3 of my children LOVE milk!  Now, if you’re a fan of rice milk, you can make it WAY cheaper, but the health benefits aren’t as great.  Depending on what you pay for rice; you can make rice milk for around 10¢/gallon; this is about what it cost me to make a gallon of rice milk.  Like I said, I live in south Louisiana where the rice is REALLY inexpensive!  Now, if you want to get fancy and make some super delicious almond milk; you can do that with this machine too!  I love the taste of almond milk, but don’t like the price or the high fat content.

Now for the flavor!  The flavor of the soy milk made in our machine was excellent!  I added 1/2 tsp of vanilla extract and 2 tsp Stevia after the milk was finished making, but was still hot.   When I made rice milk; I added 1/2 tsp almond extract and 2 tsp Stevia.  This was deeeeeeelish!  My kids LOVE IT!  Now, I plan to do a LOT more experimenting with my machine and I will keep you all updated on my progress.  I found some great information on the nutrition of soy milk I thought you would all enjoy!

Based on a 2,000-calorie diet.
* Not a significant source of this nutrient, less than 2%