Our Journey On The Steamboat Natchez #SteamboatNatchez I am so excited to share the trip we took a few weeks ago to the Steamboat Natchez!  We have been wanting to take the kids on a steamboat cruise, but every time we’re in New Orleans or Memphis, where they have the cruises; we are always so busy with other things.  We finally got the chance to go aboard the Steamboat Natchez in New Orleans.  We went a few Saturdays ago and, as luck would have it, it was family day!  Yes, we really hit the jackpot!  We didn’t really know how big we hit it until we were there, but this was HUGE!  We take a lot of trips and it always seems to be the day trips, the trips closer to home, that we just fall in love with.  The Steamboat Natchez proved to be exactly that; a trip we fell in love with!

About the Steamboat Natchez

She’s the ninth steamer to bear the name NATCHEZ. It was her predecessor, NATCHEZ VI, that raced the ROBERT E. LEE in the most famous steamboat race of all time. Even today, the NATCHEZ is proudly the undisputed champion of the Mississippi, never having been beaten in a race. In many ways, she’s the best of her line.

It’s a line that follows the course of river history, from the placid antebellum plantation era through the turbulence of the Civil War to the Gay Nineties, and, ultimately, the new millenium.

When the New Orleans Steamboat Company launched the NATCHEZ in 1975, they revived more than a famous name. They created one of only two true steam powered sternwheelers plying the Mississippi today. The NATCHEZ combines the best of contemporary construction, safety, and comfort standards with all the authenticity and style of her classic steamboat gothic predecessors. We went to the ticket counter and got our tickets and joined the rest of the passengers in the quickly moving line to get aboard the Steamboat Natchez.  The kids were so excited.  Me, meh, I was having fun, but wasn’t expecting to be too impressed.  Afterall, I was with a 16, 10, and 8 year old about to get on a boat on the Mississippi River.  I was sure I’d be referring more arguments the entire time.  But, hey, I do it for the kids, right?  Well, I couldn’t have been more wrong!  I don’t think there was one single argument during the entire two and a half hours we were on the steamboat.  That, my dear friends, is priceless.  That also tells me what an amazing time the kids and I had. There was so much to do on the Steamboat Natchez.  There was a fabulous magician, who actually sat at our table and did card tricks with the kids.  There was Cinderella who was absolutely beautiful and sang like an angel.  The kids were able to tour the engine room and watch all of the mechanisms making the steamboat go up and down the Mississippi River.  There was food, an alligator, Spiderman, and beautiful decks to walk on and watch the river rolling underneath us.  Honestly, this was amazing and so much more that we could have imagined!  I regret I haven’t taken the kids sooner.   If you ever get the opportunity to take your kids, please do, you will be so happy you did.  We cannot wait until our next trip there! 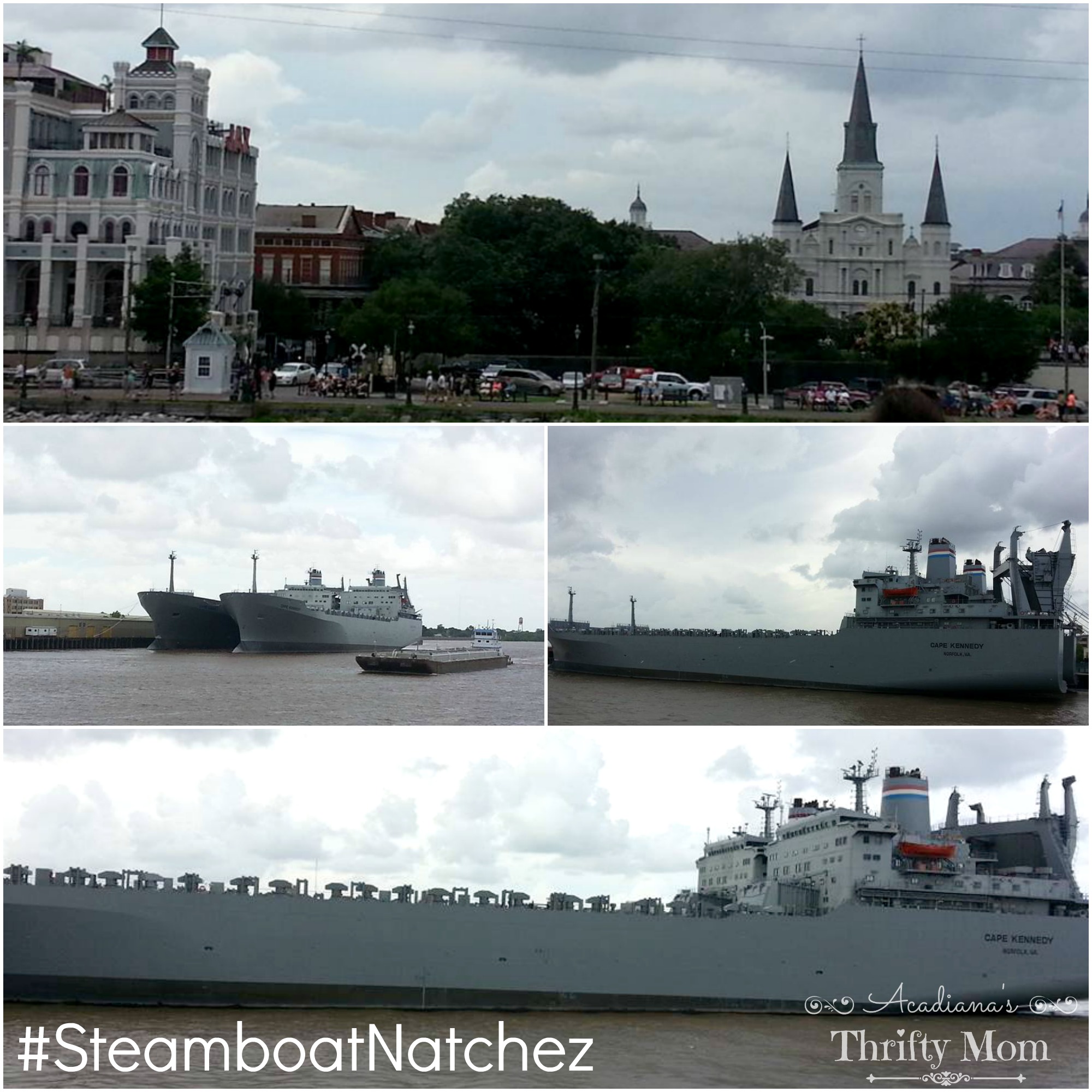 More about the Steamboat Natchez

The NATCHEZ resembles the old sternwheelers VIRGINIA and HUDSON in her profile and layout. Her powerful steam engines were built for U.S. Steel Corporation’s sternwheeler CLAIRTON in 1925. Her genuine copper and steel steam whistle is a treasured antique. Her copper bell, smelted from 250 silver dollars to produce a purer tone, once graced the S.S. J.D. AYRES. Her 32 note steam calliope was custom crafted and modeled after the music makers of the Gilded Age.

The NATCHEZ is the pride of the Mississippi River and is as beautiful as any of her namesakes. Many of her crew have been with her since her maiden voyage. Theirs is a whole new chapter in history of the river, and you can be a part of it. Her daily two-hour jazz cruises depart from the Toulouse St. Wharf (behind JAX Brewery in the French Quarter) at 11:30 A.M.; 2:30 P.M.; and 7:00 P.M.

True to tradition in every detail, boarding the NATCHEZ makes you feel as if you have entered another era. The captain barks his orders through an old-time hand-held megaphone. The calliope trills a melody into the air while the great wheel, 25 tons of white oak, churns the heavy waters of the Mississippi. You soon find yourself slipping into a sense of the old, vast and timeless river.