Coop & Cami are the king and queen of “Would You Rather…” questions.  This is the most fun and adorable show on Disney Channel!  I have 2 middle schoolers who love asking “Would you rather…”.  I don’t know about you, but my kiddos are “would you rather…” obsessed!  It is always so much fun to meet the families from The Disney Channel.  Watching these young adults doing life and being so great at it is such a joy!  We were able to sit down with the cast and ask them a few questions before decorating some super fun Christmas ornaments with them.

What was the most fun part of filming the episode?

Dakota Lotus: The most fun was probably seeing the moose, like, actually there in real life.

Question: The one outside?

Paxton Booth: Yeah. That was a real reindeer. You know what was actually kind of funny? The reindeer actually had furry antlers, and they just Photo-shopped in bony antlers, ‘cause he was young and he had furry ones.  They also set up a little area for him. It was in the multipurpose room, where we have all our stage stuff.  And we got to take photos with him and pet him.

Dakota Lotus: He was very cute. Yeah. When the live reindeer came, everyone wanted to see him. 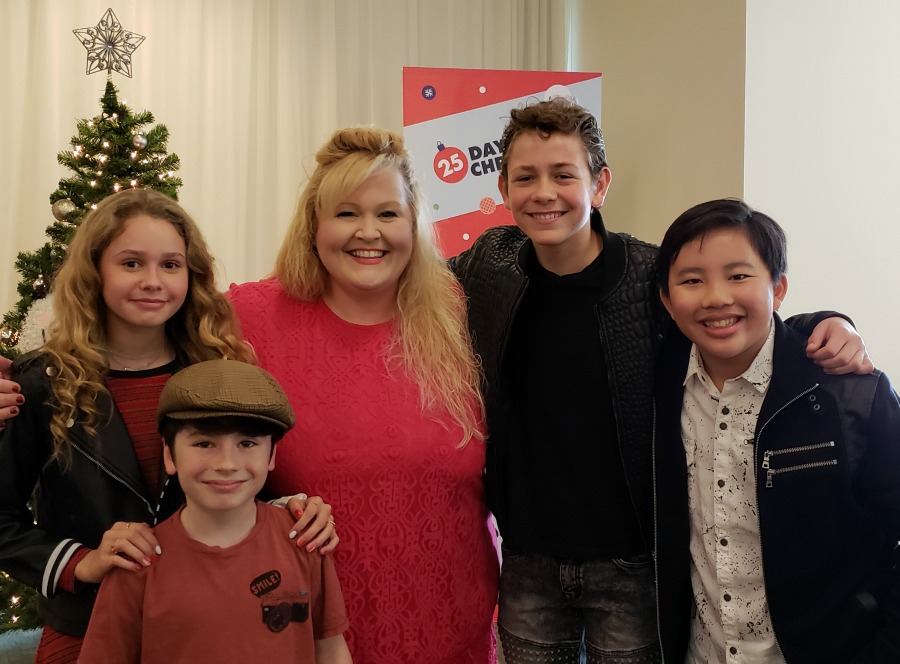 What are your favorite holiday traditions?

Albert Tsai: My favorite holiday tradition is just kind of decorating the tree and putting up all the festive décor and just spending time with my family.

Dakota Lotus: My favorite tradition with the holidays is probably just being able to spend time with my family and friends, too. And also decorating the tree. That’s always super fun.

Paxton Booth:  My grandma only, I only get to see my grandma once a year, and that is Christmas time, so my favorite part is seeing Grandma.

Ruby Rose Turner: I think my favorite holiday tradition is going around and seeing all the Christmas lights.

Do you guys decorate with a lot of Christmas lights?

Question: Do you stay up the night of Christmas, or do you prefer to go to bed early so you can wake up early to get the gifts?

Ruby Rose Turner: I prefer to go to bed early so I can wake up early.

Albert Tsai: I kind of split the difference, because I kind of enjoy staying late on Christmas Eve and then — I don’t know. Kind of in the middle.

Paxton Booth: I’m kind of in the middle. I don’t want to, like, stay up to see Santa or anything, but I like to stay late at night, spend time with Grandma and watch Santa on the Santa Tracker. You know? Watch TV, all that stuff.

Dakota Lotus: Probably go to bed early and then wake up early, so I can open the presents and spend time with my family.

This holiday season, Disney|ABC Television are teaming up with Disney store, ShopDisney.com and Toys for Tots.  Fans and families can celebrate 25 Days of Christmas by dropping off a new, unwrapped toy at a U.S. Disney store or on shopDisney.com until December 15th and Disney store will contribute $5 per toy to Toys for Tots, up to $1 Million!  For more information on Toys for Tots, go to ToysForTots.org.  To watch your favorite holiday content go to 25DaysOfChristmas.com.  Post a selfie with your toy on social media using the hashtag #25DaysOfChristmas About Coop & Cami Ask The World:

Middle school siblings Cooper and Cameron Wrather make nearly all of their decisions, both mundane and madcap, by crowdsourcing opinions from the millions of followers of Cooper’s online channel.