Carter Oosterhouse:  Just to see that, when those lights went on, it was the craziest thing.  My brain had to adjust just to know what I was looking at.

Question: How do they manage all the electrical?

Carter Oosterhouse: They become very good friends with the electric company. I mean, they have to. Their transformers change from this big to this big (using his hands). On the power pole, your transformer is usually this big, theirs are massive, just because they have to.

Carter Oosterhouse: A lot, it’s a lot of money! But fortunately if they win, they can win a lot of money too, so that’s just as good.

Question: How much do they win?

Carter Oosterhouse: They win $50,000 – every episode wins $50,000 – and I think today because we’re on our 6th season, we’ve given away $1.5 million, but this Monday is the big one. I already thought we did the big boys, I thought that’s what we’re celebrating anyway, but now is the big part of the competition show – it’s the heavyweight edition. It’s really fun. 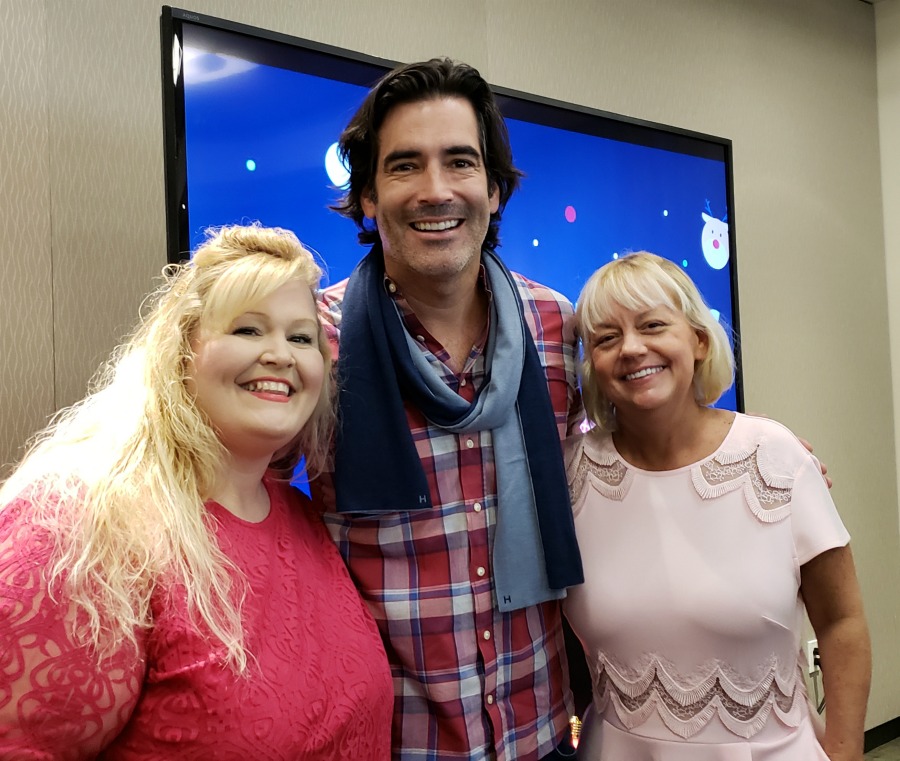 Next we asked both Carter Oosterhouse, the host of The Great Christmas Light Fight and Sherry Yard, judge on “The Great American Baking Show: Holiday Edition”, what their favorite holiday traditions are.

Sherry Yard: Ooh, breakfast, I love breakfast! I love to make very unique breakfast things, like latke fries, and I cook popovers and I put smoked salmon in them. So my breakfast is noshing, it’s all about everyone coming over for eating a little something. You know you’ve worked up an appetite, so then after opening up the presents, you go back again and can still nosh. So it isn’t just omelettes or things like that, it’s just all different, fun edibles.

Carter Oosterhouse: Well, because we have a two-year-old, it’s more creating those memories now.  Being on the show, I don’t wanna put up lights at all – because I can’t compete!  What I’ve always done, even with my family, and now we’re creating these little things, is we do DIY things all the time. One is pine cones and dipping it into white glue and glitter and then stringing them together just to create some garland and stuff. We do that quite a bit. Now it’s the best because it’s little two-year-old Flora, because she’s learning all these Christmas things. I have to say, yesterday I tried to watch the first episode with my daughter, and I said “Hey Flora, we’re gonna watch daddy on TV.” And she’s never seen Daddy on TV so she was like, “Dadda? No Dadda. Daniel Tiger.” So I was like really? Oh man, I can’t compete with that. 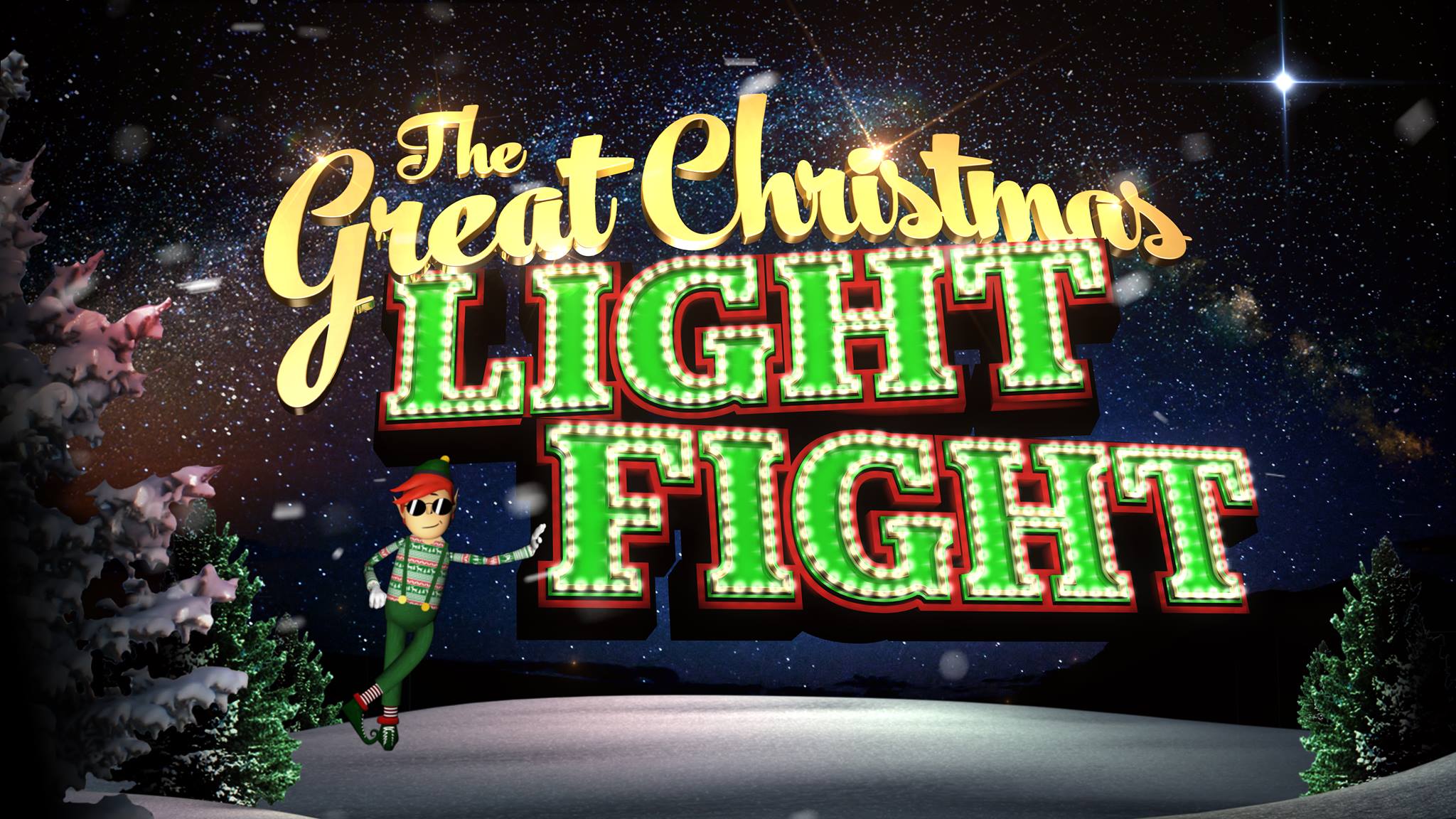 Carter Oosterhouse: For me personally, the one common denominator on our show is that that’s why everyone puts all these lights up. It’s not self-involved, it’s a very communal aspect. That people have such a good response from their community that’s why they’re doing it year after year. And people are doing it from 5 to 35 years, and they do it year after year because their community – there’s so many memories that they’re creating – not only the memories that they’ve had themselves, but the memories that they’re creating now with these families and these kids in their community. And that is such a beautiful thing to see, because that is what Christmas is all about.

Sherry Yard:  That’s so interesting, because it’s very much alike to baking, because I always say my best recipe is memories. Because you make a wedding cake, you make a birthday cake, you make cupcakes, whatever it is that you’re making, it’s a memory that will always be in someone’s mind. And then it’s shared, just the same as lights, and so as you’re baking, you don’t bake a cake and then sit in a corner by yourself with it…it’s shared, baking is all about sharing. That’s what I love about this show, it’s this comradery, it isn’t a cutthroat competition.  It’s about sharing recipes, learning from each other, and sharing with everyone out there. I said, if anything we can do, is moving the needle forward more on baking so people understand it and they’ll share more and they’ll bring people around the table.

How do you judge?

Question: Since obviously the shows are still competitions…how do you guys determine the winners?

Sherry Yard: I think yours is more difficult to judge.

Carter Oosterhouse: When I got on the show – because I started after Season 2 and have been on since – I really thought someone else would tell me who won – I really did! I thought a producer would come up and say…or at least somebody else would help you, and that is not the case. You have to give your examples of why and how…and having a design background, I look for balance in lighting, I look for creativity, I look for uniqueness and shared experiences. And the experiential moments that I see from the East coast to the West coast is completely different. So for that, everyone is unique and everyone has their own sort of flavor, and that’s what I look for – who has the best in that aspect. I like stuff that is completely different that you wouldn’t expect in Christmas. So when you see something where somebody’s able to relate Star Wars, or somebody’s able to relate a dinosaur or somebody’s able to relate princesses within their Christmas display, that is unique to their display, and that’s not what everybody has, and that’s what I love to see. That’s the fun part.

Sherry Yard: Same here. No one’s ever told us who to pick, which is wonderful, and makes it a twist and a turn, because the way that the program is set up with the three competitions back-to-back, they could be a number 10 on one end and then they could be a number 3 on the other end, and it’s the average. So it’s a very unique way of judging compared to what I’ve done with the Food Network. It’s a little more identifiable. Even myself and Paul wouldn’t know until the last challenge, and then we’d have to do the math. So you really see the reality of our faces…and one of them is a blind test – we have no idea who made these pies or whatever it is…all we see is whatever they’ve created. There’s no judging based on the individual, so it’s so fair and it’s even fun for us. This holiday season, Disney|ABC Television are teaming up with Disney store, ShopDisney.com and Toys for Tots.  Fans and families can celebrate 25 Days of Christmas by dropping off a new, unwrapped toy at a U.S. Disney store or on shopDisney.com until December 15th and Disney store will contribute $5 per toy to Toys for Tots, up to $1 Million!  For more information on Toys for Tots, go to ToysForTots.org.  To watch your favorite holiday content go to 25DaysOfChristmas.com.  Post a selfie with your toy on social media using the hashtag #25DaysOfChristmas About The Great Christmas Light Fight:

The Great Christmas Light Fight showcases the wildest and most spectacular Christmas displays in America. In each one-hour episode, four families from all around the country decorate their homes to the extreme in the hopes of winning the coveted Light Fight trophy and a $50,000 prize, with a total of $300,000 given away for the season. As the temperature cools down, the competition heats up when families invite us from out of the snow inside their homes to witness their fanatic Christmas décor for the very first time. In addition to all of the stunning inside/outside displays, the first ever “Heavyweights” episode will showcase light shows that have grown too large for any home.