Disney On Ice Princesses & Heroes is coming to the Cajundome and now you have a chance to win tickets for your family!  My kiddos love Disney on Ice and the new Princesses and Heroes looks like it is going to be amazing! 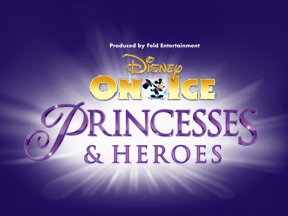 Disney On Ice!  Enter a world of wonder where heroes and hearts prevail. Join Ariel as she yearns to explore the world above the waves and Prince Eric breaks Ursula’s slithering spell to reclaim his one true love. See Prince Philip defeat the evil Maleficent as she transforms herself into a fire-breathing dragon in a race against time to rescue Sleeping Beauty’s Aurora. Be there to discover a whole new world with Jasmine and Aladdin. And, watch in awe as the dreams of Cinderella, Belle, Snow White and Tiana all come true. High flying jumps, daring acrobatics, breathtaking skating and lovable Disney friends are just a wish away! There’s even a special appearance by Disney’s newest princess, Rapunzel.
Believing is just the beginning at Disney On Ice presents Princesses & Heroes! Beautifully told through artistic skating and graceful acrobatics, this story of eight Disney Princesses and princes proves that wishes come true for those who believe.  “EIGHT MAGICAL DISNEY STORIES IN ONE ICE SHOW!”
Showtimes:
Mar 27, 2014 (Thu) 7:00 PM
Mar 28, 2014 (Fri) 10:30 AM
Mar 28, 2014 (Fri) 7:00 PM
Mar 29, 2014 (Sat) 2:00 PM
Mar 29, 2014 (Sat) 6:00 PM
Mar 30, 2014 (Sun) 1:00 PM
Mar 30, 2014 (Sun) 5:00 PM
Tickets
Buy tickets soon!
Tickets on sale now!
VIP Rinkside – $50.00*, VIP Premium – $40.00*, VIP – $35.00*, $25.00*, $18.00* & $15.00*
*Applicable service charges, handling and facility fees may apply. 4% sales tax included in the above stated ticket prices.

Acadiana’s Thrifty Mom is giving away a family 4 pack of tickets to Disney On Ice at the Cajundome!
a Rafflecopter giveaway

Check out these other great blog posts: I’m Getting My Muppet Nails ON For Muppets Most Wanted! Why Should I Pray and Read The Bible With My Children?