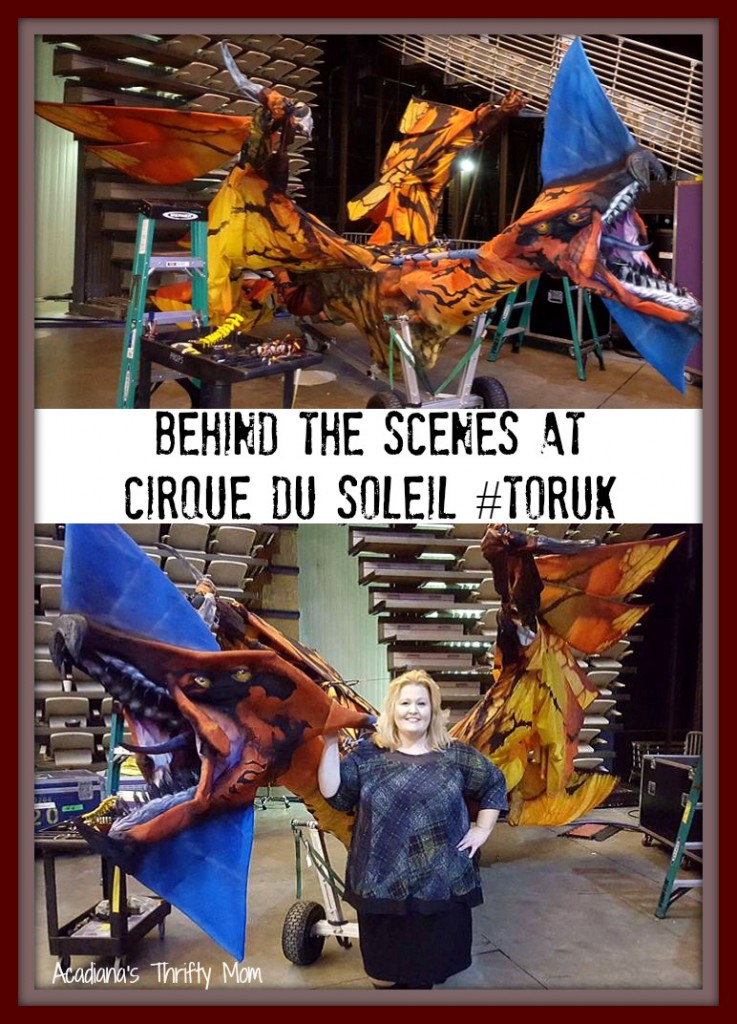 I had the amazing opportunity to explore behind the scenes at the Cirque Du Soleil Toruk show at the Cajundome in Lafayette, LA, last week. I had never been to a Cirque show before last week, so I wasn’t real sure what to expect.  I was amazed at the amount of preparation that goes into putting this show on at the Cajundome.  It was surreal, the night of the show, to see how everything came together.  These performers practice 10-12 hours a day, 6 days a week to get prepared and stay in shape for this show.  Lafayette, Louisiana was only the second stop on this tour, so everything was still a bit new to everyone; which only adds to the excitement!  I was able to walk around and catch a glimpse of the activity swirling as everyone was preparing for the first show at the Cajundome in Lafayette.  Costumes were being checked, performers were perfecting their routines, and the set was being put into place all as I walked around with my chin dragging the floor.   The amount of work that was going into this show, in my town, was breathtaking. All of the circus trunks full of costumes were out, just ready for someone to come suit up!  There were backstage signs pointing the way for all of the staff from around the world.  The Toruk show has 36 artists of 15 different nationalities.  Only 5 of these artists have ever worked on a Cirque Du Soleil show before.  That, to me, is amazing. Toruk is also the first Cirque Du Soleil show to have puppeteers and English spoken in the show.  As I was watching Pandora being erected, I could imagine the direhorses running around the arena.  The details in the viperwolf and direhorses was amazing.  They look just like the movie creatures!  I couldn’t wait to see them in action. 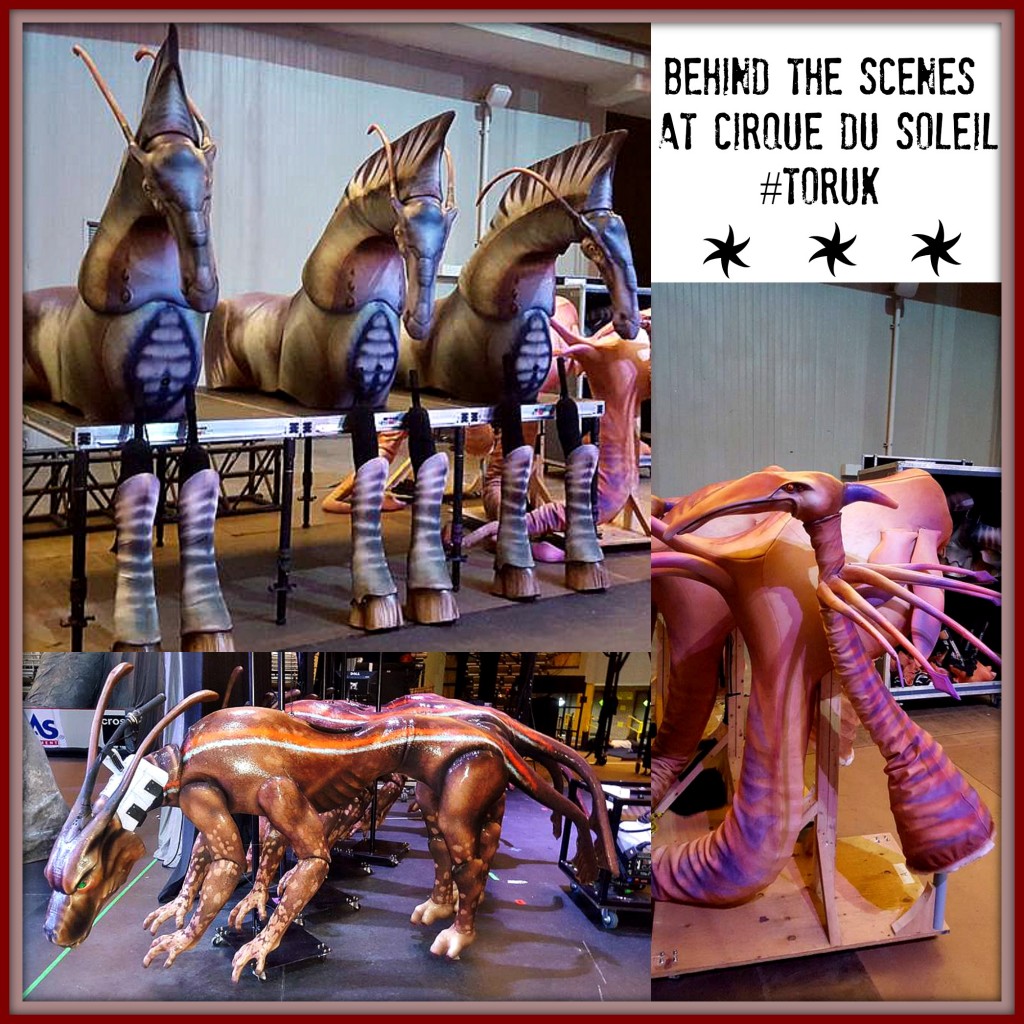 TORUK – The First Flight is a live immersive multimedia spectacle that brings to the stage the breathtaking world of James Cameron’s AVATAR like you have never seen it before.

Through a riveting fusion of cutting-edge visuals, puppetry and stagecraft buoyed by a soaring cinematic score, Cirque du Soleil applies its unique signature style to James Cameron’s imaginary world and “makes the bond” between two kindred artistic visions that capture the imagination.

This live immersive experience also bears the distinct signature of directors and multimedia innovators Michel Lemieux and Victor Pilon. It is a living ode to the Na’vi’s symbiotic coexistence with nature and their belief in the basic interconnectedness of all living things. ~ Cirque Du Soleil 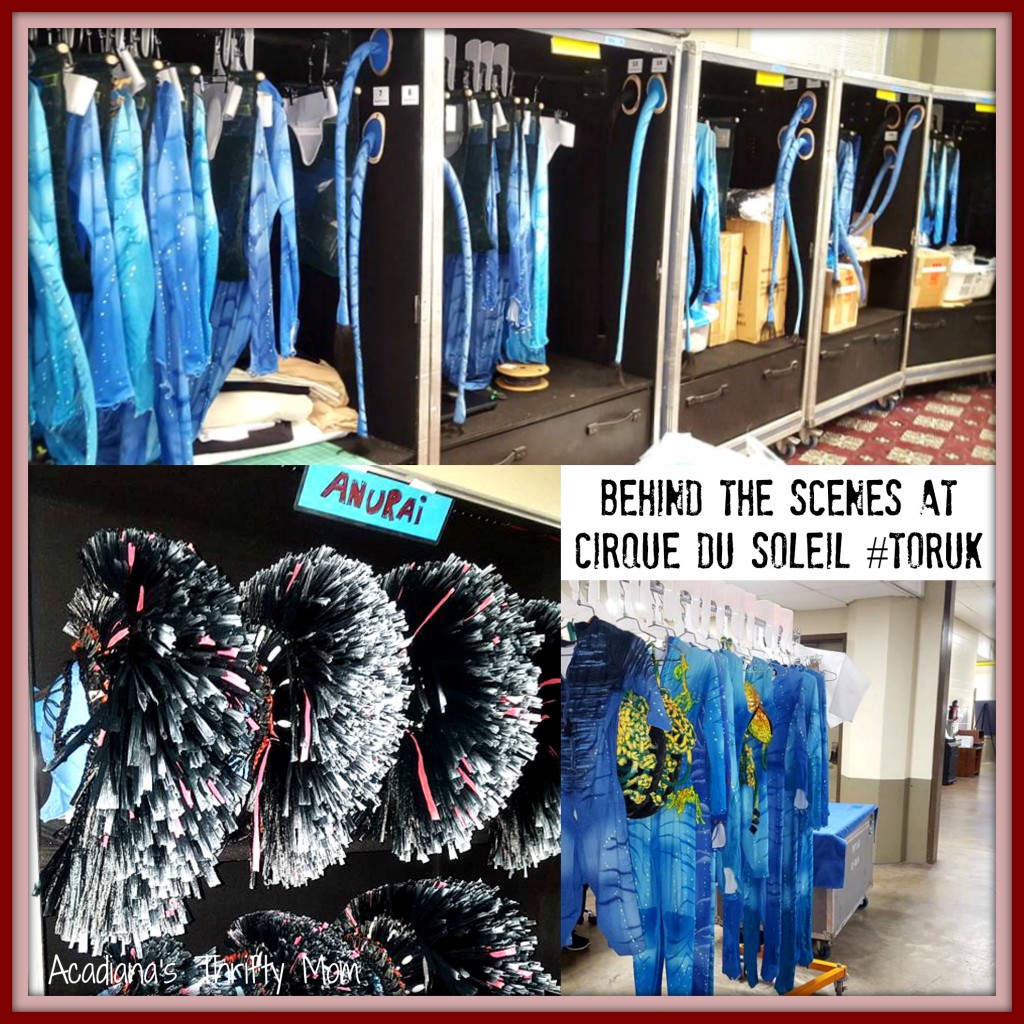 Pandora in All Its Splendor – Lemieux and Pilon, who also wrote the show, sought to convey the awe-inspiring beauty and vital impetus of the world of Pandora – its rich textures, lush flora, and youthful buoyancy. The multimedia projections that evoke the awe-inspiring landscapes – from the Floating Mountains and the Omaticaya Hometree, to the Anurai’s animal sanctuary and the lush jungles where the Tawkami live – create a visually stunning environment for the performers. So do the large-scale effects that come from the storyline, such as the earthquake and volcano eruption, the rivers of lava rising from within, and the Shaman’s visions projected on a huge floating, ethereal veil.

Some video effects are synched with the performers’ movements, such as the bioluminescent trails they leave in their wake as they meander through the forest. Some effects are mere evocations meant to create mood, like the creatures circling the sky appearing only in shadow form on the ground. ~ Cirque Du Soleil

22 thoughts on “Behind The Scenes At Cirque Du Soleil #Toruk”